Right now, the Sacramento region is updating its Sustainable Communities Strategy for 2016. 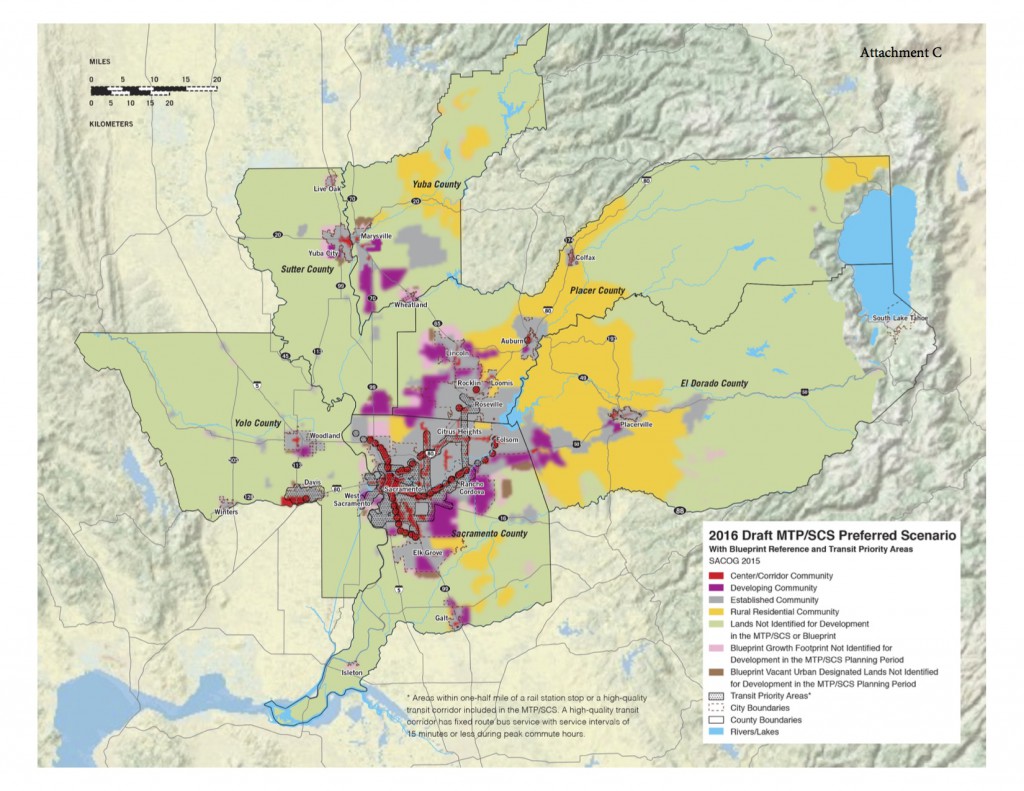 The region’s 2012 plan was one of the best in the state, and we believe that leadership will continue.

But there’s a big disconnect between the region’s governing agency—the Sacramento Area Council of Governments, or SACOG—and the region’s cities and counties, which are lagging far behind.

The scenario: fact or fiction?

The update is well under way. In April, Sacramento’s draft “preferred scenario framework” came out. The full draft plan comes out in September. There will be a 60-day review period, and the final plan should be adopted in February 2016.

Based on what we’ve seen so far, the plan looks promising. The new SCS looks like it plans to reduce greenhouse gas emissions through true land use and transportation change to significantly reduce vehicle miles traveled (VMT). The Sacramento region, we believe, is doing this—exactly what these plans are intended to do—to a greater degree than any other region in the state.

In the plan, SACOG achieves its reduction in driving, or VMT, largely by reducing sprawl development. That is, if the region’s footprint does not continue expanding, its residents won’t have to keep driving more and more. This is a laudable goal, and for this, we applaud SACOG and its leadership.

But will the strategy actually be implemented? Right now, it looks very unlikely.

The region is planning to dramatically reduce sprawl. But the cities and counties that make up the region—and make the land-use decisions—aren’t. There is a big gap between vision and implementation here. Too many jurisdictions are headed in the wrong direction.

Overall themes of the plan: fix it first and get it done

Because the plan’s major parameters have not changed much—the greenhouse gas reduction targets are the same, and growth projections are only slightly down—the SACOG Board chose to focus instead on two overall themes: a “fix-it-first” initiative, and the implementation of the 2012 plan.

These themes make sense. Implementation is the key. Here’s how those are playing out, with some improvements in the 2016 plan over 2012:

To “fix it first,” SACOG has increased funding for maintenance and rehabilitation of the existing road system by 4% to total 36% in the 2016 plan. These funds have largely been moved from the “new road and highway capacity” category. As we hear more and more about deteriorating infrastructure regionally and nationally, this makes sense, to fix roads now and prevent much higher costs later.

But what about transit? Despite this step in the right direction for road funding, we are concerned that the plan largely funds public transit with new revenues; that means transit funding will drop from current levels if these new revenues (from cap and trade, or from local measures) don’t actually materialize. That’s going in exactly the wrong direction.

To “get it done,” SACOG sees its role largely as providing information and tools to help jurisdictions, who make the decisions. The agency has made significant innovations in modeling, performance assessment, and tools to inform decision-making. It has developed its first-ever Climate Adaptation Plan. Its Rural Urban Connections Strategy (RUCS) is impressive: it takes a close look at the impacts on the agricultural economy of differing growth scenarios. SACOG has also improved the plan’s consideration of public health, equity, and natural resource conservation. You can find SACOG’s summary of anticipated performance outcomes of the Draft Preferred Scenario here.

The real concern around implementation, however, is that despite SACOG making it a theme for the past three years, there is still a yawning gap between the plan’s projections and jurisdictions’ actions.

It’s still not clear that the plan will actually be implemented—despite the theme.

Targets set by the Air Resources Board define how much the region must reduce its greenhouse gas emissions: 7% by 2020 and 16% by 2035. SACOG’s Preferred Scenario comes in at 7.73% and 15.55%, and narrowly meets federal air quality conformity standards.

While this isn’t a final number, we’re concerned that this isn’t quite hitting the target — they’ll need to get that number up to 16% in the final plan.

Only a few months ago, SACOG’s plan wasn’t meeting the targets at all. The agency took decisive steps to fix that.

Lower gas prices mean more driving, and since gas prices have been unexpectedly low, the 2012 project list no longer met the 2035 greenhouse gas reduction target. So this spring, SACOG staff worked with individual jurisdictions to revise the plan. Building on the Metropolitan Transportation Commission’s model for “project performance assessment” and adding its own innovative “phasing analysis,” SACOG was able to demonstrate the poor performance of over 80 road projects. As a result, $400 million worth of poor projects have been delayed or cut out of the MTP, to get the region back on track to meet the 2035 target.

SACOG’s success at getting rid of bad projects that were already part of the plan is truly impressive. It is unprecedented in Sacramento, and is a big step towards SCS implementation.

SACOG is known for doing some of the best planning in the country and leading the way to connect land use and transportation.

But the region is woefully unprepared to successfully implement its 2016 SCS, because the growth plans of individual jurisdictions differ wildly from the regional land-use scenario. They plan for far more homes than the SCS does, and put far more of them outside existing communities.

You can see a comparison of the regional housing forecast totals of the SCS to the “build-out estimate” of the cumulative general plans here.

The total build-out, from all the general plans of the Sacramento region, adds up to 661,211 houses beyond the 2012 existing stock—2.3 times the SCS estimate of 284,896. Of this 661,211 figure, 60% of the growth is greenfield development: with 2.2 times the growth in SACOG’s “developing community” areas, and 8 times more growth in “rural residential” areas than in the SCS. Over 123,000 units are completely outside of the SCS footprint. And these figures don’t even include other major areas that cities and towns still want to expand into.

There is tremendous growth pressure on the region’s fringe, and not much yet, it seems, to stop it.

SACOG is not the only region with this problem – local growth projections, added up, often exceed regional totals. But with its history of leadership and collaboration, SACOG should lead the way in developing innovative strategies to support growth that is consistent with the plan.

Transit must be funded far more and far sooner to guide the region’s long-term growth to successfully implement the SCS. That’s what it will take to reduce driving, fight climate change, and create more healthy and sustainable communities.

Investing in major public transit improvements could help, by guiding growth along rail and bus lines to reduce driving. But the SCS puts these improvements off until far too late to change the region’s growth patterns.

The situation is made worse by the region’s inadequate funding for transit. Transit funding and service was severely cut in 2008-2010 amid the economic downturn, and the system has still not recovered. SACOG’s current draft scenario does not anticipate getting back to 2007 transit levels of service until 2020. Some estimate that it will take even longer. That’s an egregious delay.

SACOG gets good GHG/VMT performance in early years of the plan by dedicating substantial funding—8% of revenues—to bike-walk improvements. This is great.

But public transit is also key. In the plan, many major transit improvements don’t happen until its later years, and the financing for these late improvements seems murky.

The success of a planned 2036 transit system depends on significant changes in Sacramento’s growth patterns, but jurisdictions are failing to plan for enough infill to provide the densities and ridership needed to make the system work.

SACOG analysis shows that the proposed transit improvement timeline could work if the region’s jurisdictions were willingly conforming to the land-use footprint of the SCS, but they are not.

More funding is needed soon for public transit, for both expansion and operations, to help guide growth in a more sustainable way. If towns build homes and jobs first, then try to add transit, that’s far less likely to be effective. Especially if those homes and jobs are built far from anything else.

New transportation funding measures are being considered for the 2016 ballot in Sacramento. It is critical that these put significant percentages toward public transit. Your voice will be needed to help shaping these measures—and so shape the region’s growth, and its future.

For now, ECOS, ClimatePlan, and partners will continue to work together and work with SACOG to improve the plan, and ultimately, help the region live up to its potential.

More resources about the plan:

This month’s staff report including the Preliminary Draft MTP/SCS chapters can be found here.

The April staff report for the Draft Preferred Scenario Framework, with additional materials, is here.