The Targets are Set: Eyes on the (GHG Reduction) Prize

For the four largest regions in the state:

For the regions in the Central Valley:

The push for more ambitious targets

ClimatePlan partners and allies showed up in force with a strong message that communities deserve more ambitious targets than those proposed. In particular, our San Diego allies including Environmental Health Coalition, Sierra Club-San Diego Chapter, and Climate Action Campaign organized dozens of advocates and community residents to share their stories of how higher targets would help improve quality of life in their neighborhoods and to demand an increase in San Diego’s target from 19% to 25%. 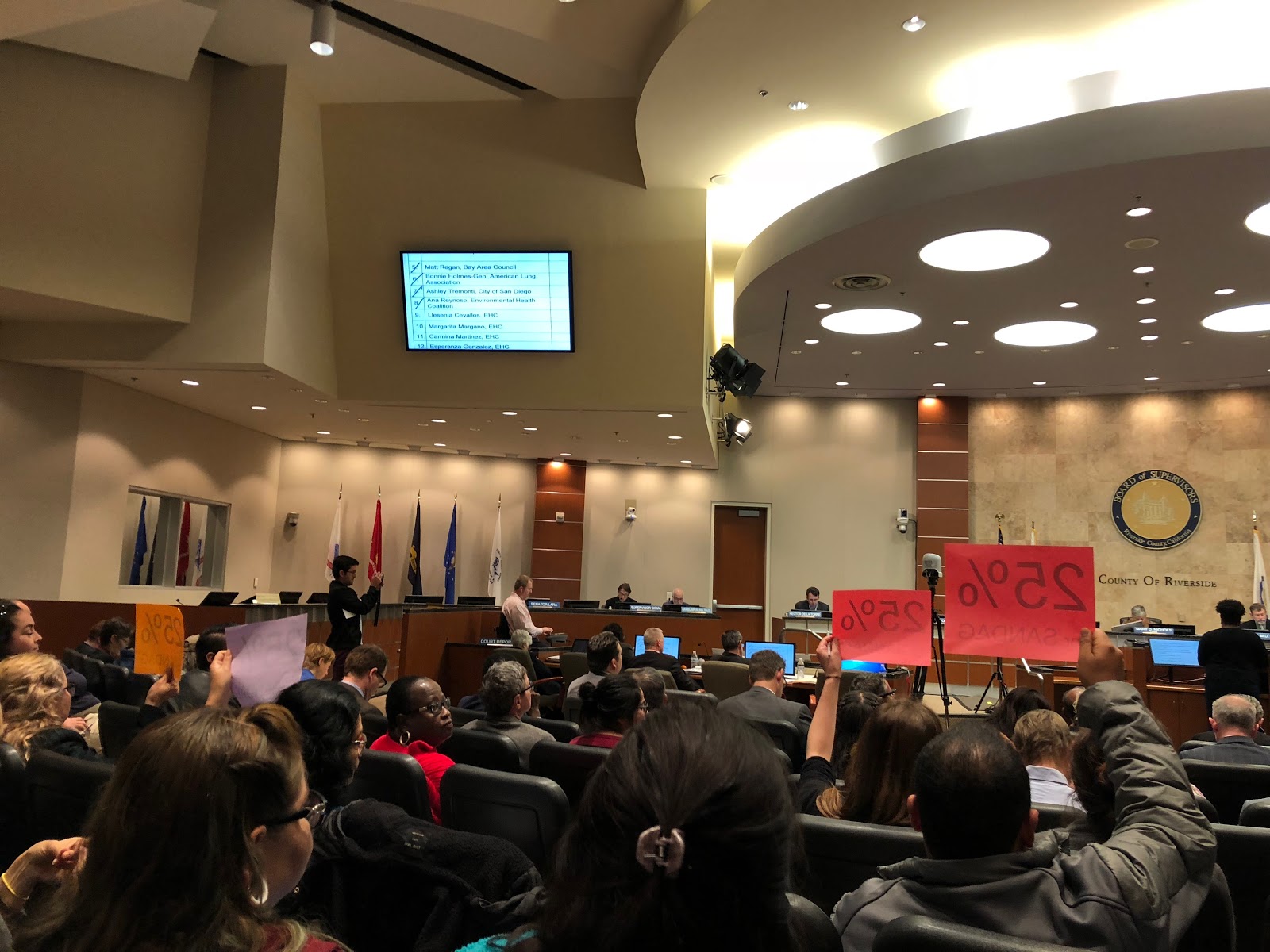 Community residents and advocates demanding an increase to the San Diego target of 19% to 25%.
Photo Credit: Chloe Ames, ClimateResolve

And, their voices were heard! The energy in the room was palpable, as board members were forced to consider higher targets. Boardmember Takvorian made a motion to increase the San Diego target to 21%, and after robust discussion of the best way forward, the motion ended in a rare split vote with Supervisor Gioia and Senator Florez supporting the increase. Ultimately, it seemed that many board members had already shifted their focus away from their role in adopting targets to how they could support regional and local action and working with the California Transportation Commission on aligning transportation funding with climate goals. Although we’re disappointed with board's final decision on the targets, we’re looking forward to moving ahead with implementation of the adopted targets, which increase the existing targets between 3 to 6% in each region of the state, (as shown above).

We need to reduce GHGs from land use and transportation by 25% to achieve our climate goals. Together, the updated SB 375 regional targets represent a statewide GHG reduction of 19% below 2005 levels by 2035. (This translates into each of us driving a half mile per day less than we do now--we can do this!) But we still have a VMT gap. Not only do we need to focus on implementing the regional plans developed under SB 375 to meet the target of 19%, we need additional strategies beyond SB 375 to meet the 25% goal. We’re working closely with partners on ensuring the state closes that gap--more on that soon.

We Have a “Call to Action”

We now have a SB 375 call to action! To achieve a 19% GHG reduction, we need to see real shifts in regional transportation investments and development patterns. Staff presented a new approach to their role in SB 375, focused on what the MPOs are doing to achieve the GHG reductions. ARB staff explained, “We want to know three things: 1) What the MPOs say they were going to do. 2) Did they do it? 3) Was it effective?”

We want to know the same things! For the past 10 years, we’ve been working with regions to craft plans to reduce GHGs. Although we know the plans aren’t perfect, they have gotten better. Now is the time to make sure they are being translated into changes on the ground.

I like to think of the Sustainable Community Strategies (SCSs) as recipes. If you follow the recipe, you’ll reduce GHGs. With the updated targets adopted, what is the next step?

The first strategy is to get clear on what is in the recipe. The public deserves to know exactly what changes on the ground are needed to achieve the GHG reductions. For example, how much transit ridership does the SCS count on? How many multi-family units need to be built? Where? Right now, ARB staff is updating the SB 375 Program Guidelines--this is a prime opportunity to ensure that the SCSs are more transparent and accessible. Workshops on SB 375 Strategy Review Guidelines are coming up. Details below if you can attend:

The second strategy is to get clear on whether the recipes are being followed in an equitable way. Compared to what the recipe calls for, what is the current transit ridership? What investments is the MPO (Metropolitan Planning Organization) making to improve transit ridership? How many multi-family units have been built? Where? Has the MPO provided any funding to incentivize this development?

Last year, ClimatePlan helped pass SB 150 (Allen), which requires ARB to report to the legislature on SB 375 implementation. Using the metaphor, this is a key part of understanding whether or not the recipes are being followed. We’re currently working with ARB staff to ensure the SB 150 report is aligned with SB 375 to help keep the MPOs accountable.

The two strategies I outlined are about shifting the power to the public, giving community members and advocates the tools to be effective in translating the plans into changes on the ground. With national attention on California’s leadership in addressing climate change through land use, housing, and transportation policy, we are excited to take this new step forward.