State Policy: Opportunities and Challenges at the end of 2019

In October, we at ClimatePlan were elated to announce Governor Newsom’s latest effort to tackle climate change – Executive Order N-19-19 – which required the State Transportation Agency will leverage $5 billion in annual state transportation spending to:

This type of action is critical if California wants to avoid even more destructive wildfires.

Strong, dry winds combined with a multi-year drought have contributed to the California wildfires. But now, wildfire season in California is starting earlier and ending later because of climate change. Warmer spring and summer temperatures, reduced snow pack, and an early spring snowmelt create a longer and more intense dry season. It also isn’t helping that California continues to build homes and invest in transportation projects in fire prone areas.

Transportation is the single largest emitter of greenhouse gas emissions in California. Simply said, if we want to mitigate the impacts of climate change, California cannot continue to fund transportation projects that increase greenhouse gas emissions. Despite this ambitious Executive Order, we’ve seen less action and more misunderstanding as agencies attempt to implement it.

In early October, Governor Newsom veto SB 127 (Wiener), the Complete Streets Bill. If signed, this bill would have required the California Department of Transportation (Caltrans) to consider bicycle and pedestrian safety improvements when it repairs state routes that serve as local streets. Why did the Governor veto the bill? It was too prescriptive and costly. While there is clear debate about whether or not Caltrans cost estimate to implement SB 127 was correct, everyone has agreed that much more needs to be done to improve and increase safe walking and bicycling in California.

In his veto message, the Governor references new leadership at Caltrans and his Executive Order as a way to accelerate and increase investments in active transportation. However, as Tony Dang and Esther Rivera at California Walks write in their own blog post about SB 127, “we don’t have any more time to waste to address our climate crisis and its attendant havoc in our most vulnerable communities. What we need are real leaders who will follow the science and listen to community needs to take decisive action that centers equity and inclusion.”

SB 127 was a clear opportunity for Governor Newsom and Caltrans to do two things:

California Walks, alongside California Bicycle Coalition, American Heart Association, AARP, and Safe Routes Partnership, are circulating a petition to demand immediate action from Caltrans. We urge you to sign on in support to make sure California’s streets are safer for people walking, biking, and taking transit

Haven’t heard of the Interregional Transportation Improvement Program (ITIP)? You’re not alone! The goal of the ITIP is to improve interregional mobility for people and goods across California. It’s a 5 year state funding program that invests in the development, maintenance, and operations of projects that:

Caltrans develops this plan and the California Transportation Commission approves it. Very few people follow the ITIP, but that’s all changed this year.

When Caltrans released its draft ITIP this year, it made a pretty significant change. Based on Executive Order N-19-19, the draft ITIP called for: 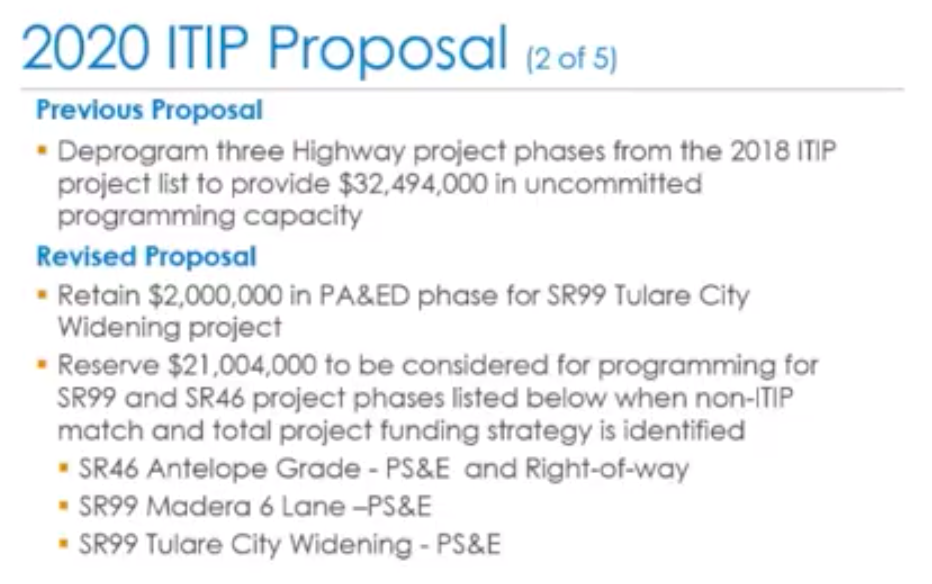 Not quite! This decision created a storm of controversy and misinformation. Big newspapers like the LA Times and the San Francisco Chronicle were running article with alarming titles, “Are California Transportation officials pulling a bait and switch on gas tax funds?” and “Newsom declared the state should spend more on climate change. It ignited a firestorm.”

Despite 16 ClimatePlan partner organizations sharing our strong support for the draft ITIP’s action to prioritize investment for shovel-ready mobility projects that will give Californians more convenient ways to get around our state without having to get in a car, Caltrans recently amended the draft ITIP.

The revised proposal for the 2020 ITIP will:

The pot for the uncommitted 2020 ITIP programming capacity to be held in reserve for priority rail projects and other priorities aligned with Executive Order N-19-19 is now significantly lower because California prioritizing funding for widening projects that we know is proven to increase greenhouse gas emissions.

And now we as advocates are forced to choose: do we want highway widening projects or do we want to reduce greenhouse gas emissions?

This meeting is an opportunity to share that we as Californians don’t have to choose between the climate and highway widening projects. California can invest—and create incentives for counties—to build projects that do both.

For example, San Joaquin Council of Governments (SJCOG) has a congested corridor plan that will ease congestion (which is what highway widening is supposed to do) and reduce greenhouse gas emissions (which highway widening cannot do). They are constructing a high occupancy vehicle (HOV)/Transit/Express Lane that would reduce the amount of passenger delay and increase mode share for carpooling and transit – since these riders would have a dedicated lane!

California needs more projects that are reducing congestion AND greenhouse gas emissions. Our staff will be at the California Transportation Commission to make sure that Commissioners know that they don’t have to choose between the climate and congestion.

If you want to attend or make sure your voice is heard on this issue, contact Nailah Pope-Harden at nailah AT climateplan DOT org.