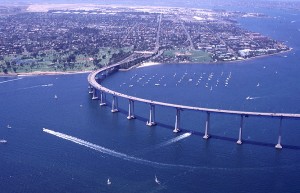 San Diego adopted its Sustainable Community Strategy in October 2011, and ClimatePlan is now monitoring its implementation.

Sign up for ClimatePlan’s weekly updates on San Diego and the state: Send us an email with “subscribe” in the subject line.

San Diego and SB 375:  Lessons from California’s first Sustainable Communities Strategy
By Eliot Rose, Autumn Bernstein and Stuart Cohen.
On October 28, 2011, the San Diego Association of Governments (SANDAG) approved the first sustainable communities strategy (SCS) under Senate Bill 375, California’s groundbreaking regional planning law.  The plan was the subject of intense scrutiny by stakeholders, state agencies and others. A new report (pdf) takes a comprehensive look at the plan and analyzes why it didn’t achieve the GHG reductions that many hoped it would.  The report also provides information on the important ways in which the plan represents a departure from business as usual, and where are the opportunities for improvement.
Learn more

“As a San Diego planner and developer with over 15 years in the industry, I support the goals of SB 375 to connect transportation and land use policies to meet the needs of a growing region. Our industry is committed to developing communities that are healthy, that hold their value, and improve the quality of life in the San Diego region. SB 375 provides the framework and incentives to support building sustainable communities.” Stephen M. Haase, Vice President – Forward Planning, Baldwin and Sons”

San Diego’s Green Dividend
By Joe Cortwright, for Move San Diego – September 2009
Despite the common belief that improving the environment is at odds with growing the local economy, San Diego stands to gain a $1.35 billion annual green dividend by reducing vehicle travel.
Link to report

• The San Diego region includes 18 cities and an unincorporated area, with total population of just over 3 million residents. By 2050, however, the population is projected to be over 4 million.
• According to the 2000 census, when asked how they arrived to/from work, nearly 74 percent of San Diegans said that they drove alone. An effective Sustainable Communities Strategy will improve transportation systems and encourage well-planned communities that take advantage of existing infrastructure and transit corridors.
• San Diego is the first region in the state to include a Sustainable Communities Strategy in its Regional Transportation Plan.

To get involved and learn more, see the websites of partner groups below. Contact ClimatePlan for help getting connected.

Partners in the Region