Over the past few months, ClimatePlan staff have been working with key partners in the city of Modesto - Catholic Charities of Stockton, Tuolumne River Trust and the Sustainable Stanislaus Community Coalition - to help plan for the city’s upcoming General Plan Update.

The General Plan Update is a major milestone for the city of Modesto. Kicking off this process gives Modesto residents an opportunity to provide their feedback and ideas for how they want their communities to evolve in the years to come. A General Plan Update serves as a “blueprint for the city’s future.” The city of 214,000 residents is gradually growing due to increasing growth pressure from nearby San Francisco and San Jose. Modesto is in the 21-county Northern California MegaRegion (Bay Area Council Economic Institute) and it’s housing, land use, jobs, transportation, and environment are all being impacted by nearby growth. Modesto residents and elected officials will be looking to both local and regional dynamics to make crucial decisions for their city.

Below are a few of the ways ClimatePlan is engaging in the General Plan Update process and supporting our partners in lifting up the community’s priorities.

ClimatePlan is currently in discussions with the city of Modesto staff and our partners about the use of a Greenprint tool within the General Plan Update process. According to our partners the Nature Conservancy, a greenprint is “a strategic conservation plan that recognizes the economic and social benefits that parks, open space, and working lands provide communities. Such benefits include recreation opportunities through the use of parks and trails, habitat protection and connectivity, clean water, agricultural land preservation, and increased resilience to climate change.”

In looking at recent Greenprint models, such as the Bay Area Greenprint or the San Joaquin Valley Greenprint, both the city of Modesto and Stanislaus County as a whole could benefit from a comprehensive mapping tool that can show not only benefits of the non-built environment (biodiversity and habitat, agriculture, water yield), but can also include housing and economic development overlays, as well as overlays illuminating potential climate risks and ideas for mitigation. A Greenprint tool democratizes a huge amount of data in making it available to the public and can be used in city, county, and community planning processes. ClimatePlan is looking forward to ongoing conversations to bring this innovative tool to Stanislaus County.

One of the first items the Modesto City Council and residents will be addressing as part of the General Plan Update is an urban limit line. An urban limit line is an invisible line drawn around a city that designates where growth can and cannot happen. It creates a footprint for the city’s growth and it’s goal is to protect natural and agricultural lands and encourage urban development within an existing city or town. 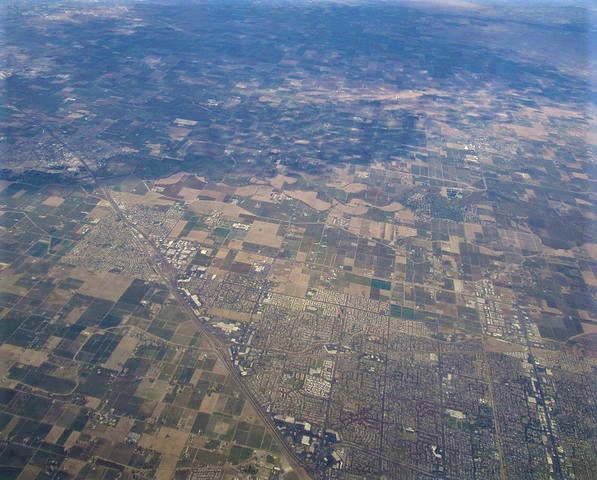 Some Modesto residents, led by organizer Denny Jackman, are supportive of the city establishing an urban limit line to protect valuable agricultural land, specifically a 700 acre area known as Wood Colony. Opponents worry that an urban limit line could stunt economic development by not allowing residential and commercial development outside of the city’s existing boundaries. The Modesto Community and Economic Development Department announced several weeks ago that they will be undertaking a public outreach process in early 2020 to talk with impacted residents about what an urban limit line could look like. From there, they will create a map of an urban limit line and will place it on the city’s November 2020 ballot.  ClimatePlan is closely monitoring the Urban Limit Line discussions and is looking forward to closely reviewing the input of the community on this process.

ClimatePlan has also encouraged the city to partner with community-based organizations to ensure strong community engagement in the outreach process, as this outreach process on the urban limit line will also be used to inform the General Plan Update.

In other cities throughout the state, urban limit lines have served a very valuable purpose in not only protecting farms, ranches, and open space, but also in encouraging and concentrating on the revitalization and economic development of downtown and Main Street corridors. Local businesses can thrive in easily accessible and walkable environments and a regenerative economy (residents’ spending goes back into the community) can begin. An urban limit line in Modesto will encourage an even more vibrant and economically healthy downtown.

Beginning in early 2020, our Modesto partners - Tuolumne River Trust and Catholic Charities of Stockton - will be supporting the Modesto community by carrying out an intensive community outreach process to provide input on the General Plan Update process. Part of this outreach process will include free leadership development and community-capacity building for residents where they will be holding three workshops informing residents about what a General Plan Update entails (and how to understand all of the wonky details that go into it) and how to effectively engage in a General Plan Update process and advocate for a resident’s and/or a  community’s needs.

ClimatePlan will be working with and supporting our partners every step of the way, most especially on some of the technical assistance pieces of a General Plan Update process.

The community workshops could begin as early as Winter-Spring 2020. The city projects that the full General Plan Update process will take at least 3 years and will formally begin in 2020.

As the city of Modesto begins to tackle some challenging, but inspiring questions over the next few years, ClimatePlan looks forward to supporting Modesto residents, our organizational partners, and the City in creating a new, ambitious and achievable vision for the city centered in equity and sustainability for all. If you’d like to attend one of the workshops coming up in early 2020 or chat about the General Plan Update process, feel free to reach out to Edgar Garibay of Tuolumne River Trust at [email protected]. If you’d like to chat more about the Greenprint tool, reach out to Amy Hartman at ClimatePlan at [email protected].