At ClimatePlan, we understand that we need policy change at all levels--local, regional, state, and federal--if we want to create real lasting change. As we advance policies that address the intersection of land use, transportation, housing, and climate, we know that much more is needed to address the challenges our nation faces, including a pandemic, an economic recession, and a reckoning against systemic racism and oppression. Starting this month, we will be interviewing our partners and allies to discuss policies they are advancing that can help us create a healthier, sustainable, and more equitable future for all.

Can you tell us about what a California Green New Deal would aim to achieve?

Like the federal Green New Deal (GND), we want California to achieve rapid decarbonization in line with what climate science shows us that we need. We want protection for environmental justice and front line communities / workers and prosperity for all. Our coalition has built a platform around three major pillars to get there: economic, racial, and climate justice. The platform is modeled on Franklin Delano Roosevelt’s Economic Bill of Rights, in the sense that all Californians have a right to good jobs, healthcare, housing, a healthy regenerative environment, and more.

Our coalition worked with Assemblymember Rob Bonta to introduce AB 1839 at the beginning of the session. That was introduced with about 8 co-authors in the Assembly. The bill would have created a task force of agency heads and representatives from labor, environmental justice, and other constituencies to come together and create a binding plan to get California moving towards a just transition within the next 10 years.

When the pandemic hit, we pivoted and revamped the bill to be a just recovery bill calling for the state’s recovery efforts to be in line with the principles of the People’s Bailout, which prioritizes assistance to people and workers, instead of corporations, and makes sure that we’re not investing the state’s money in fossil fuel infrastructure and prolonging the fossil fuel era when we should be moving to clean, renewable electricity. The revamped bill would also have made sure that infrastructure and other projects that are paid for by the state as part of the recovery hire local workers and pay them good family-supporting wages. That bill was ultimately not set for hearing so it didn’t move forward this session. We are planning to come back with more next session. Assemblymember Bonta is still very committed to this idea and so are the other folks in the coalition.

How would a CA GND meet the moment of raising racial consciousness and operate in light of the global pandemic?

At this moment, we’re seeing a mass uprising in defense of Black lives, which I think means that so many more Americans are recognizing the urgent need for racial justice than ever before. The California GND is really consistent with that because it calls for recognizing that racial disparities exist and that they exist for reasons like the systems that are in place now enable those racial disparities and entrench them. The GND we want to see would recognize those disparities and target the policy responses accordingly so that there is equity and justice for communities of color, especially Black communities. Additionally, with the pandemic, we’re seeing disparities in the health outcomes of the pandemic, as well as disparities in how the recovery is going / who is getting access to recovery resources and who can afford to work from home or who is allowed to work from home. 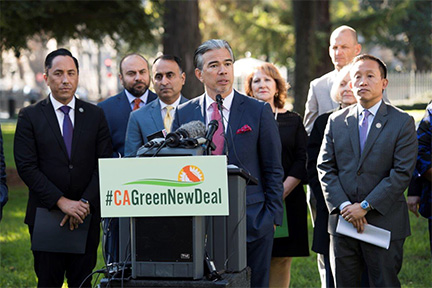 Who will the GND benefit?

The GND will benefit all Californians. There is a justice-centered focus on the people who are most vulnerable and need help the most - families who live in environmental justice communities that are overburdened with pollution and attendant health effects, and workers with precarious jobs who are left behind when there are layoffs. We want the people to benefit as opposed to the corporations and the most wealthy individuals who are not contributing their fair share to society.

How is this GND different from the New Deal in the past?  Or the federal one?

Everyone who is working in support of the GND at the state or federal level or local level is actively trying to learn from the mistakes and the unintended consequences of the New Deal, especially how the New Deal established and reinforced systems of racial oppression. The purportedly race neutral programs of the New Deal actually entrenched racial disparities that have persisted until today. That is a major reason we’ve put racial justice as one of the three main pillars of our platform. I think we’re generally pursuing the same general goals as the federal GND.

How can folks get involved in the GND effort?

Folks can check out our website - greennewdealca.org - and they can sign on as an individual supporter to get added to the list to stay in the loop about what’s happening. If you’re part of an organization, you’re welcome to join the coalition and endorse the platform.

Are there any resources you would suggest if folks want to learn more about what a GND would look like?

There is some reading material on the California GND website, especially our platform. There is also the letter that we sent to Governor Gavin Newsom’s Task Force on the Economic Recovery to get a sense of what we’re talking about when we’re talking about just recovery. There are a lot of different resources out there with people exploring what the GND could mean. A Planet to Win: Why we Need a Green New Deal is a great book on it that I’d highly recommend.

The only other thing I’d like to add is that a major priority for us in a GND is remaking the economy to uplift and invest in the care economy, which means investing in teachers, nurses, social workers, and child and elder care domestic workers. These are all sectors where there is a great demand for services, especially now during the pandemic. Our system has underinvested in these sectors for generations. It would help a lot of people, put people to work, and it’s low-carbon work too.