The American Lung Association in California (ALAC) released its annual State of the Air report today. Not surprisingly, the report notes that the top 5 worst metro regions for ozone pollution are all in California, including Los Angeles, Hanford-Visalia, Bakersfield, Fresno-Madera, and Sacramento. No less than 77% of Californians live in counties that have high numbers of unhealthy air days. 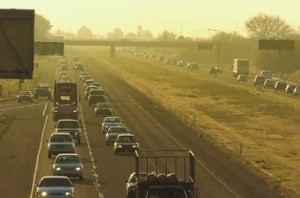 While the report documents ways in which each region has made improvements to air quality, it also demonstrates just how much ground there is left to cover, especially in the San Joaquin Valley region, whose air pollution rates – by every measure – have remained stubbornly at or near the top since the report was first issued in 2000. This is particularly concerning because over the next 35 years, the San Joaquin Valley is predicted to add 3.6 million new residents – making it the fastest-growing region in the state. That means that many more of the state’s residents are going to struggle with the respiratory health effects of poor air quality: asthma, COPD, heart disease, etc., which in turn will lead to higher healthcare expenses, lost wages and lost productivity in a region of the state that can ill afford it.

Given the magnitude of these impacts, one would expect local officials to be receptive to arguments that planning for healthy, sustainable communities makes for good economics: after all, San Joaquin County could save as much as $47 million in 2035 by making infill-oriented planning decisions now. Interestingly, however, these arguments seem to have less traction than ones that describe the economic competitiveness of infill and its potential to attract young college graduates and entrepreneurs looking to invest in the community and put down roots. This is logical – cash-strapped cities climbing out from under the Great Recession are wise to look for new revenues.

While linking economic development and public health in order to get good policies written into the Sustainable Communities Strategies has been thus far effective at the level of discsussion, Richard Florida published a review of some analysis of creative class segregation in major metropolitan areas today which suggests that there is more to be done to fully ensure that the benefits of healthy and sustainable planning are realized by the many, not the few. The article’s major finding is that high density and high quality transit are strongly correlated with greater clustering of creative class workers. Having lived in cities like Chicago, Washington DC, and Seattle, I’ve observed this high-rent, high-density concentration first hand – where proximity to a transit stop is a marker of status and access that few can afford. Not only that, but cities with greater ethnic diversity tend to drive creative class concentration as well. In the most populous, diverse state in the country, this isn’t a feasible course of action, yet we note a California version of this same effect in San Joaquin County’s Regional Transportation Plan – significant investments in roads and commuter trains, with less funding for local transit (more likely to be used by low-income residents in the county), and a general lack of infill.

As the San Joaquin region grows, we have the opportunity to make transportation and land use investments that help us transition from a car-oriented to a transit-oriented future in an equitable manner, and we must be vigilant about maintaining a balance that allows us to leverage the benefits of creative class residents while making sure that all of our residents benefit from walkable communities and good transit access, regardless of race, ethnicity, or income.