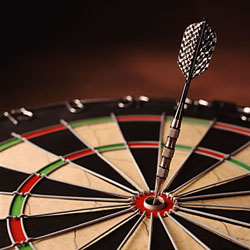 No, it was about targets. From the Big Four MPO “brothers” in their matching blue pinstripe suits, to the Board members on their dais, to us advocates with our three minutes each, everyone had something to say about the targets.

As Coalition for Clean Air’s Bill Magavern put it, “while it may feel like just yesterday, it has been four years since the targets were set, and a lot has happened since then.”

The targets in question are, of course, the SB 375 regional greenhouse gas targets that ARB assigned, not without controversy, to each of California’s major regions back in 2010. Those targets set the parameters for each region’s Sustainable Community Strategy (SCS). Despite the early controversy, so far every region in California has either met or exceeded their targets, in some cases by a landslide.

The Santa Barbara region, for example, was given a target of zero for 2035. Yes, that’s right, ZERO, as in, please don’t do anything at all for the next 30 years to reduce your emissions, just keep ‘em where they are. To Santa Barbara’s enduring credit, they adopted a plan that would reduce emissions by a whopping 15.4%. Many other regions, big and small, from the Bay Area and Southern California to Butte County and Tahoe, are exceeding one or both of their targets.

So an update to the targets seems like a no-brainer. Especially since 2014 is ARB’s first chance to update the targets and if they don’t do it this year, by law they must wait until 2018.

The big news was revealed early in the meeting, when ARB staff included “Reviewing the SB 375 Targets” in their list of priorities for the year. Silent happy cheers rippled across the auditorium at this announcement. This was a key request in ClimatePlan’s recent letter to ARB signed by 23 partner organizations.

But not everyone seems keen on revisiting the targets.

The Big 4 MPOs (SoCal, Bay Area, Sacramento, and San Diego) urged ARB to leave the targets unchanged for the time being. Their message was simple: we need time to implement the plans we have, and raising the targets now would cause us to “uproot the tree,” as MTC’s Steve Heminger poetically put it. His concern was echoed by several ARB board members who also sit on MPO boards, including Supervisor John Gioia (MTC) and Mayor Judy Mitchell (SCAG).

It’s a fair point. The true value of SB 375 doesn’t lie in modeling, or targets, or endless forecasts of the distant perfect future. Having a great plan is, well, great, but if those plans just sit on the shelf gathering dust, only to be replaced by another plan that also gathers dust, what use are they?

Many of the first round SCSes make ambitious commitments to active transportation, transit and smarter, more equitable growth patterns. But there are few carrots, and even fewer sticks, to encourage local governments and transportation agencies to bring those plans to life. The MPO Directors are quite right that without Redevelopment 2.0, cap and trade revenues, and other new resources, these plans won’t achieve their potential.

On the other hand, the choice between higher targets and implementation may be a false dichotomy. After all, federal law requires that Regional Transportation Plans (of which SCSes are just one component) must be updated every four years. The targets are just one of many factors the MPOs must consider when updating their plans. Many would argue that these regular updates are inherently designed to measure progress, take stock of what’s working, and make any needed course corrections to ensure plans are resulting in real world changes.

Whether or not the targets change, the world is changing. Millenials are driving 23% less than previous generations. As ARB board member Dan Sperling pointed out, new and innovative mobility services such as ridesharing and bike sharing have taken off since 2010. These innovations have huge potential to reduce driving, perhaps more than any of the strategies contemplated in the current plans.

Despite all the talk, no action was taken to modify or reverse staff’s recommendation. So we can anticipate that, later this year, ARB staff will begin a review of the targets.

Lost in all this talk of targets was another important and timely issue. The San Joaquin Valley SCSes got very little air time during the Board discussion, despite lots of public comment from advocates. ARB staff even briefly mentioned that they hired an outside expert to help review the ‘puzzling’ modeling results coming out of the Valley. Despite these concerns, and a less-than-illuminating report from the Valley COGs themselves, the Board discussion was cut off before anyone spoke up about the Valley.

We hope ARB’s focus on the Valley will increase in the coming months, as the SCS process comes to a head. Draft SCSes will hit the street in February and March. With at least one Valley county (Merced) poised to not meet its targets, and GHG predictions ricocheting around like caffeinated puppies, the steady leadership of ARB will be needed to ensure that all Valley communities achieve cleaner air and healthier communities.